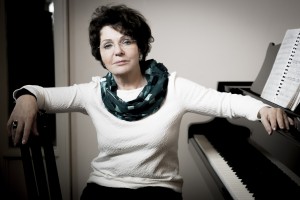 Marion van den Akker studied at the Sweelinck Conservatorium in Amsterdam with Erna Spoorenberg. She continued her studies with Henk Smit and Aafje Heynis, Ellen van Haaren in the Netherlands and with Josephine Veasey in the U.K. A grant allowed her to participate in master classes given by Nicolai Gedda, Italo Tajo and Brigitte Fassbaender.

Van den Akker has a particularly affinity with orchestral songs. Her performance of Mahler songs (Lied von der Erde, Lieder e/f Gesellen, Kindertotenlieder) performed mostly in Germany and the Netherlands were received with great enthusiasm. Her concert repertoire also includes the Verdi’s Requiem, the Stabat Mater by Dvořák and by Rossini, Beethoven’s Missa solemnis and Ninth Symphony, Alt Rhapsody Brahms and the passions of J.S. Bach.

Van den Akker’s voice inspired many composers to write for her.
These include Sebastian Huydts (Emerson Songs), Willem Jeths
(I Go), Caroline Ansink (Jeanne d’Arc) and Robin de Raaff (Dickenson Songs).
Peter Jan Wagemans ‘Das Neunte Lied’ was premiered during the Gergiev Festival in a performance focusing on Robert Schumann.
Recently after a production of Peter Grimes where Marion van den Akker performed the role of Aunti (summer 2021) the director of this opera Paul Carr, who happend to be a repected composer aswell, was inspired by Marion’s voice and composed  a song for her (Music, when soft voices die).

In addition to her performing art Marion is also a very dedicated singing teacher and runs her own  classical singing studio at the Stichting van de Omroep, Heuvellaan 33 te Hilversum.

MA: Well, I think it can be very helpful. I agree with the Fach system in a certain way. It was invented in Germany, actually, and being used by them. It’s a very special system. It can help you to, perhaps, not overuse your instrument and finding a good way to coach your voice and not going into extremes in certain roles that you can damage yourself, especially when you are still very young. So I think it is not a bad system, it is useful.

AC: Is it a valid way of categorization? MA: Yes, I think it is. It’s very valid because you can build up a good repertoire without overusing your voice. Only if you stay more or less in the same category of course. AC: How is it used? Or how should it be used?

MA: I don’t know nowadays how it is used, because in my time, they used it in Germany in quite a proper way. They produced one or two seasons in advanced and they looked for voices to fill in the roles. But in “the old days” it was the other way around. The producers and intendants of the opera houses were more interested in the singer, they searched operas to fit the singer’s voice. If they really stick to the Fach system you could sing good roles, as I did as a lyrical mezzo, like Cherubino, Dorabella, Carmen, it was not too heavy, and it was good to build repertoire. But sometimes, some houses asked me for Cherubino as a light mezzopart but they also ask me to sing Venus a dramatic soprano, that was impossible for me at that time ! It’s totally different. Venus can be sang as a Zwischen-fach1 role. Venus can be sang by a dramatic soprano, but it can also be sang by a high full lyrical mezzo. It’s in the middle of two Fächer, like Fidelio a bit.

AC: What are the dangers or opportunities involved?

MA: I think there’s not a real danger when you stay within your Fach, on the other hand it can be a bit boring when you want to develop your voice. Some German singers stay for years in the same theater and singing the same parts over and over again (at least in my days) But You can also develop your voice in different ways. Let’s say you are a soubrette and you like to develop more in a lyrical coloratura soprano. Because that’s very near to each other, then you don’t get the chance to do that in some houses. There are other houses, perhaps bigger houses where you get the chance to do so, but you need to be really careful with yourself and 1 Voice that fits between two categories. take everything in consideration; can I do that? Is my voice strong enough, is my body strong enough, do I have the stamina on the long run? Can I sing all this different parts? So it depends a lot on yourself, and your knowledge of the music, on your own voice, on the right support of your teacher. Otherwise those houses will exploit you.

There are no upcoming events.

Thank you for visiting my website. You'll find a lot of information about me and about my vocal, educational and organisational capabilities. If you'd like to know more about me, don't hesitate and send me a mail through the contact page on this website.
Come back often, since I will update regularly and keep you posted about my schedule and activities.

This website uses cookies to improve your experience while you navigate through the website. Out of these, the cookies that are categorized as necessary are stored on your browser as they are essential for the working of basic functionalities of the website. We also use third-party cookies that help us analyze and understand how you use this website. These cookies will be stored in your browser only with your consent. You also have the option to opt-out of these cookies. But opting out of some of these cookies may affect your browsing experience.
Necessary Always Enabled
Necessary cookies are absolutely essential for the website to function properly. This category only includes cookies that ensures basic functionalities and security features of the website. These cookies do not store any personal information.
Non-necessary
Any cookies that may not be particularly necessary for the website to function and is used specifically to collect user personal data via analytics, ads, other embedded contents are termed as non-necessary cookies. It is mandatory to procure user consent prior to running these cookies on your website.
SAVE & ACCEPT